Wiper leader Kalonzo Musyoka and Makueni governor Kivutha Kibwana are again bracing for war in the coming Nguu/Masumba ward in Kibwezi West, Makueni county following the death of MCA Harris Ngui which occurred on Tuesday last week after the vehicle he was driving collided head-on with a lorry at ACK area, Salama, along Mombasa-Nairobi highway. Ngui who was a Wiper MCA was travelling to Nairobi from his home in Nguu when he was involved in the accident in the evening.

The MCA was with a lady who too perished in the accident. It is not known what engagement the MCA was having with the woman. Makueni county police commander Joseph Ole Naipeyan said the lady sustained head injuries and died on the way to Machakos Level 5 Hospital. According to Mukaa subcounty police commander Jacinta Mwarania, the MCA died on the spot. The accident was a head on collision between a Prado that Ngui was driving and a lorry. The police report filed at Salama Police Station said the driver of the truck who was heading towards Mombasa overtook several vehicles before colliding with Ngui’s vehicle which was coming from the opposite direction. 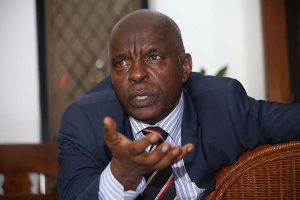 “Salama Police Station is reporting a fatal injury road traffic accident which occurred today 15/06/2021 at about 1830hrs within ACK area along Mombasa Nairobi highway,” the report read in part. Their bodies were taken to the Machakos Level Five Hospital mortuary. The MCA was driving a Toyota Prado registration number KBC 555U during the incident. His car rammed into an oncoming trailer registration number KCH 215G/ZF4201, make Shacman. Both vehicles have been towed to
Salama Police Station.

Following his sudden demise, Wiper party leadership sent condolences to the family saying the party had lost a brilliant mind. Also mourning the MCA was Governor Kibwana. Ngui won the seat on the Wiper ticket in the 2017 general elections with 4,054 voters while Timothy Maneno, an independent candidate, came a distant second with 1,169 votes. To play out during the coming by-election will be the Kalonzo, Kibwana rivalry over Ukambani land supremacy battles as it has emerged that the Wiper party, the powerful party in the region, seems to be splitting ahead of the 2022 elections.