The recent defection of politician Suleiman Shahbal to ODM has triggered a fierce political battle for the Mombasa gubernatorial party’s ticket. Supporters of Mvita MP Abdulswamad Nassir and deputy governor William Kingi are unhappy with Shahbal’s entry to ODM. 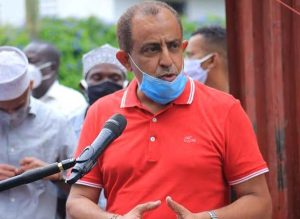 Nassir and Kingi are interested in succeeding Governor Hassan Joho in 2022 general elections. Nassir has since demanded that before Shahbal settles in ODM, he has to apologise to ODM leader Raila Odinga and Joho for his past abuses. “I welcome Shahbal to ODM provided he does not defect before 2022 polls. I also challenge him to first apologise to Raila and Joho for his past utterances,” the Mvita MP told a section of the press. Shahbal is known for flipflopping parties.

Towards the 2013 general elections, Shahbal surprised his supporters when he defected to UDF from ODM and then to Wiper party all in a matter of weeks. Last year, he attended a Wiper party office opening function and was introduced by Kalonzo Musyoka as the sole party candidate for the Mombasa gubernatorial seat but a week later, he was campaigning for the ODM candidate in the then Msambweni parliamentary by-election.

Even Kingi, the deputy governor while commenting on Shahbal’s defection to ODM, wondered whether the politician would be able to stay in the party, saying “he has lacked a firm political stand in the past”.Sources claim, Shahbal will be dealt a political blow at the ODM nominations stage. It is said Nassir, a longtime loyalist, is the choice of Joho camp and local financiers.