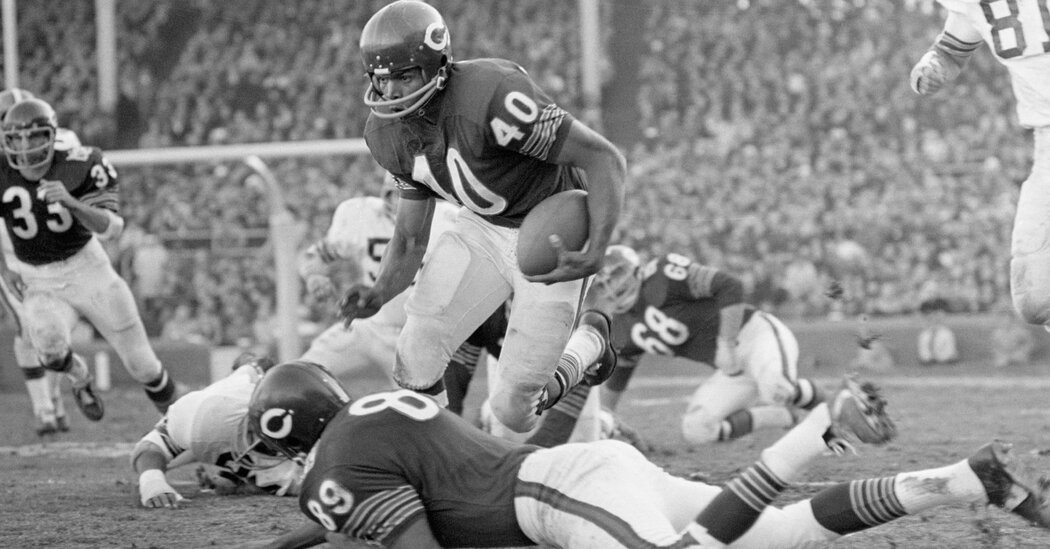 It is perhaps no small irony that in 1965, the year that the Chicago Bears chose running back Gale Sayers fourth over all in the draft, George Halas, the team’s longtime owner, picked linebacker Dick Butkus one spot ahead of him. The tandem defined the team and the league for most of a decade. Both players ended up in the Pro Football Hall of Fame.

But where Sayers was graceful, Butkus was brutal. Sayers eluded tacklers, Butkus slammed into ball carriers and threw them to the ground with glee. Sayers spent his years avoiding collisions. Butkus, the most fearsome player of his time, seemed to live for them.

Both of them also had their careers cut short by knee injuries, a reminder that for all the grace football players can display, the game at its core is a bone-crunching, head-knocking, jaw-breaking showdown.

Sayers, who died early Wednesday at 77 from complications of dementia and Alzheimer’s disease, is rightly remembered for his athletic artistry that some compared to dancing ballet. Footage of his games from the 1960s show him effortlessly slicing left and right, leaping like a hurdler and crisscrossing the field in search of slivers of space between defenders on his way to the end zone.

“There’s times I would make a move, and I couldn’t explain it,” Sayers once said, almost dumbfounded by his talents. “It’s a god-given instinct to do things like that.”

But N.F.L. highlight reels are deceiving. They are long on acrobatics, often shown in slow motion and set to dramatic music. The game at that speed looks practically elegant. Odell Beckham Jr., reaching behind his head to make a one-handed grab. John Elway throwing a tight spiral 50 yards downfield into the outstretched hands of a receiver running full stride. Barry Sanders almost tiptoeing past charging linebackers.

Those same highlight reels are short on the tackles that leave ball carriers on the ground in a crumpled heap, or the jarring hits that were often addressed with smelling salts. Those videos omit the career-ending plays when injured players are taken off the field on stretchers.

Sayers’s brilliant but brief career hit the skids on Nov. 10, 1968, when on a run to the left side of the field, he tore ligaments in his right knee after a 49ers defender slammed into it. Four Bears teammates carried him off the field. For a player who made his living by using his knees not just to run, but to cut in every direction, the injury was devastating, especially given the state of orthopedic surgery at the time.

Sayers, though, was determined to show that he could overcome the odds.

“I wanted to prove that one could come back from a serious knee injury in a year,” Sayers told N.F.L. Films. “People play with broken ribs, fingers, whatever it may be. But they never shed a tear. They went out there and played.”

Remarkably, the next season, Sayers finished with more than 1,000 yards rushing for the second time in his seven-year career. But unable to glide through defenses the same way, he was never the same and played in just four more games the next two seasons before retiring in 1972.

Though Sayers’s failing knees ended his career, the invisible injuries to his brain may have been what led to his ultimate demise. In Sayers’s day, teams had full contact practices nearly every day during the week and two, and sometimes three, times a day during training camp. During his football career, he likely absorbed thousands of hits.

In March 2017, Sayers’s family revealed that he had dementia after he had publicly displayed symptoms of it for years. He joins a growing list of hundreds of football players who are known to have developed dementia and other neurological disorders linked to brain trauma.

“Like the doctor at the Mayo Clinic said, ‘Yes, a part of this has to be on football,’” Ardythe Sayers, Gale’s wife, told The Associated Press. “It wasn’t so much getting hit in the head. It’s just the shaking of the brain when they took him down with the force they play the game in.”

Even before his diagnosis, Sayers was well known for avoiding the spotlight. N.F.L. players are trained to be stoic, to never show weakness and to sacrifice their bodies for the good of the team. They want to be remembered for their athletic prowess. Many, as a result, suffer in silence for years after they leave the game and the cheering stops.

That’s what made Sayers’s admission of frailty so startling. In his understated way, Sayers joined other former N.F.L. greats like Nick Buoniconti and Tony Dorsett who have spoken up about the toll football took on their bodies, and their minds.

“It’s not hard for me to go public like this because so many others depend on getting out there and not to be ashamed,” Buoniconti said in 2017, the same year Sayers’s family disclosed Gale’s dementia. “I never, never, never dreamed it would happen to me.”

It happened to Sayers, though. Fans and reporters could see his mind failing almost in slow motion, at testimonial dinners and autograph signings. N.F.L. highlight reels rarely show that either.

Truck seized over Sh2.3m fine to be escorted to Uganda

The Upshot on Today’s Polls