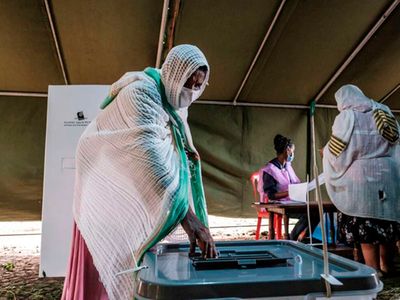 On June 21, 2021, millions of Ethiopians, across the nation, turned up early and en masse, to truly lay a foundation of democracy as they participated in the country’s sixth general election. The peaceful election, witnessed by over 2,000 media outlets and described variously as the centrepiece of a reform drive by Prime Minister Abiy Ahmed, registered yet a key milestone in the rich history of Ethiopia’s statehood.

Unlike all previous elections, this year’s general election genuinely promises a new solid sense of optimism which is attuned to the future aspirations of the country as a leader of democracy and linchpin of stability in the region. The head of the African Union’s observer mission and former Nigerian president Olusegun Obasanjo said that the election was peaceful and a lot better than the previous one in terms of opening the space for electoral participation.

Despite the two episodes of postponement, the run up to the voting day generated an aura of hope compounded with resilience which has not been witnessed before. In fact, Prime Minister Abiy Ahmed had, in the run up to the election, noted that the elections offer ‘the nation’s first attempt at free and fair elections.’

To appreciate why this election is significant requires one to look back at the history of electioneering in Ethiopia. It is then that one appreciates holistically its current status setting, the incremental reforms and general commitment of the leadership.

Ultimately, the wave of democracy championed in the country offered a new variant for inclusive and participatory engagement in this year’s election. It signalled a turning point in the country’s long electoral history.

National elections in Ethiopia are almost a century old; they began in the 20th century. The first parliament in the country was established in 1931 and members were elected through indirect elections. This defacto arrangement remained in place for decades.

There were five elections between 1955 and 1974 in which elders used to meet at the district level and elect members. Between 1974 to 1991, electoral competitors were solely the followers of Socialism political ideology. During this period, there were no alternatives available for voters to select from.

Since 1995, when the Federal Democratic Republic of Ethiopia (FDRE) was established, five national elections have been held, with a five-year interval: 1995, 2000, 2005, 2010 and 2015. The sixth round of national elections, since the return to civilian rule, took place against a backdrop of a myriad of bold reforms, stretching from institutional, political and legal reforms.

Among others was the restructuring of the National Election Board to be more independent and able to perform its duties without the interference of the government. It is headed by a former opposition party leader in Ethiopia.

Before 2018, it could be argued that while Ethiopia had participated in numerous elections, it had not seen a decisive breakthrough in electoral reform. Thus, the revamping of democratic space since 2018 is a desire towards peace and stability.

The Constitution of the Federal Democratic Republic of Ethiopia, in its Article 56, declares a Political Party or a Coalition of Political Parties that has the greatest number of seats in the House of People’s Representatives shall form the executive and lead it. Thus, even for those who will be in opposition after the election results are out, they are a government in waiting.

Statistically, there were over 40 million eligible voters who cast ballots across the country, majority of whom are youth of different ethnic backgrounds. This was a clear sign of the appetite for democracy and prospect of stability in the country. Most registered political parties fielded candidates, with a total of 47 political parties participating. Like all democratic countries, the stakes in this year’s election were high and every political party put its best foot forward.

It is apparent that we are not yet out of the woods, but the prevailing political process will continue to offer sufficient space for opposition groups and political parties to freely participate in political and electioneering processes.

For the those in government, the opposition, civil society organisations and Ethiopians of all works of life, congratulations! While Ethiopian statehood is old, our election outlook is young.

Meles Alem is the Ambassador of the Federal Democratic Republic of Ethiopia to The Republic of Kenya, Malawi, Seychelles and Comoros, and the Permanent Representative to UNON.

Tejveer Rai out of WRC Safari Rally after crash : The standard Sports

Time to face it! The old education system is obsolete and irrelevant

In the midst of a crisis, I can’t suppress a yawn at polls drama