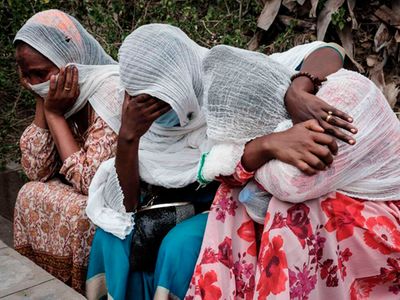 The Ethiopian army on Thursday denied carrying out deadly airstrikes targeting civilians at a busy market place in Togogo, a town in the Tigray region.

“We haven’t carried out air strikes on a market place. How can this be? The army has the capability to hit targets with precision,” said Colonel Getnet, a spokesman for the Ethiopian Defense Forces.

He, however, admitted that there were air strikes carried out that only targeted rebels operating near Togogo town.

“Therefore, the allegations of market attacks are completely false”

He told reporters Thursday that the airstrikes targeted only rebels who had been gathered to celebrate Martyrs’ Day.

He claimed that those killed were militants in civilian clothing.

Eyewitnesses and hospital sources, however, yesterday told Nation.Africa that over 50 civilians had been killed in Tuesday’s aerial attack.

The strikes came a day after the Tigray Defence Forces (TDF) reported ‘major’ victories against allied Ethiopian and Eritrean forces.

However, Colonel Getnet dismissed reports that Tigrinya forces had taken control of key areas including Adigrat, a strategic town which is some 45 km from the Eritrean border.

“TPLF is engaged in a campaign of false information,” he said.

According to eyewitnesses, the Ethiopian army on Wednesday blocked ambulances belonging to NGOs including Red Cross medics from reaching victims in the town which is about 25 kilometres North West of the regional capital, Mekelle.

A medical team which was dispatched from Mekelle Ayder Hospital was also stopped at check points and later detained for hours after they attempted to reach the scene via a different route, a health worker told Nation.Africa.

He added that the medics were forced to return to Mekelle despite showing a pass letter from the interim government.

“Several people have died because they couldn’t immediately get medical treatment,” an eyewitness said.

“Not far from where I live, Seven out of the total eight members of a family instantly died when airstrike hits their house” he added.

The European Union and the United States have condemned the airstrikes.

“Denying victims urgently needed medical care is heinous and absolutely unacceptable,” the US Department of State said in a statement.

“This is yet another attack adding up to the horrific series of international humanitarian law and human rights violations, atrocities, ethnic violence, combined with serious allegations of use of starvation and sexual violence as weapons of conflict” said the EU in a statement.

The High Representative of the EU for Foreign Affairs, Joseph Borrell, has placed Ethiopia on the agenda for the next Foreign Affairs Council in July to discuss possible responses with EU member states.

Africa at a glance