Former Minneapolis police officer Derek Chauvin was sentenced on Friday to 22.5 years for the murder of George Floyd, a death that touched off international outrage.

Chauvin showed no reaction as the verdict was announced by Judge Peter Cahill.

Reaction outside the courthouse, where about a hundred people gathered was muted at first, then turned a little more hostile. Chauvin could have been sentenced to as many as 40 years in prison and the prosecution had requested 30 years.

“I thought it was going to be 40,” said Ashley Dorelus between sobs. “I thought they were going to give us a little bit of hope.” Dorelus said she flew from her home in California for a month to watch the trial, even though no spectators were allowed.

The sentencing was, she said, “white privilege at its finest.”

Floyd family attorney Benjamin Crump said the sentence was “historic”, the longest prison sentence ever for a Minnesota police officer, and that it would bring the nation “one step closer to healing by delivering closure and accountability.” 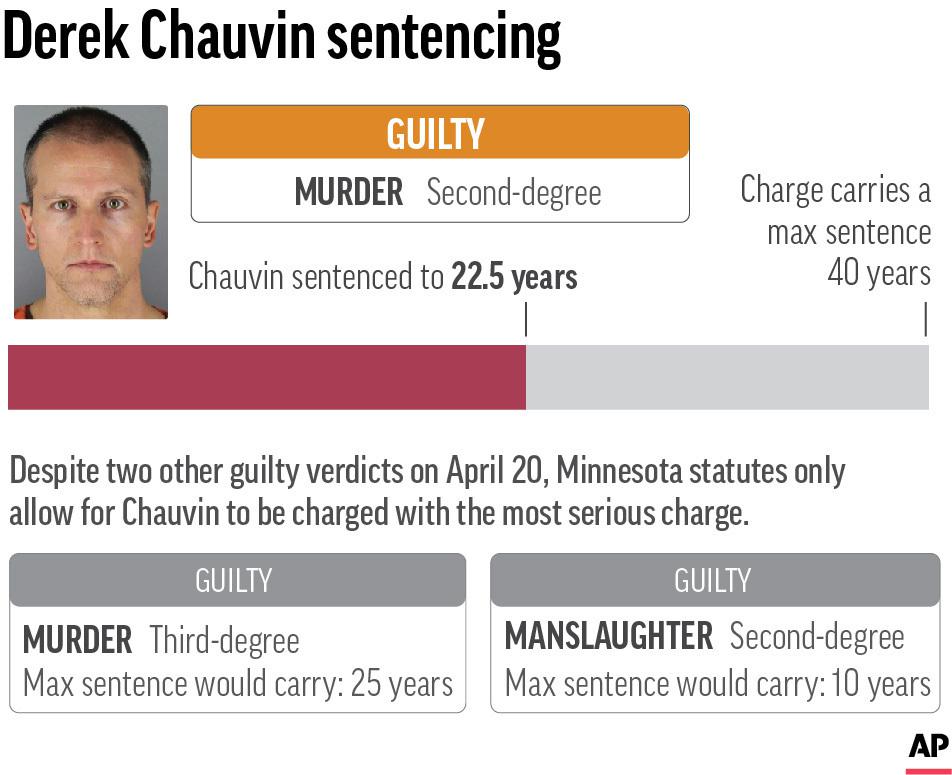 The sentencing was emotional at times.

George Floyd’s seven-year-old daughter, in a videotaped interview, spoke of missing her father and the games they played together.

Floyd’s brother Philonise spoke tearfully in court of having nightmares while watching endless replays of the infamous cellphone video that showed Floyd pleading for air under Chauvin’s neck.

Another Floyd brother, Terrence, sighed and looked directly at Chauvin.

“Why did you do it? Why did you stay there on his neck?” he demanded.

The answer did not come.

Chauvin, not wanting to influence federal civil rights charges he was facing, only spoke briefly during the sentencing to offer his condolences to the Floyd family.

“I do want to give my condolences to the Floyd family,” said Chauvin.

He also said there would be other information eventually coming out that would be of interest to the Floyd family.

In a surprise, Chauvin’s mother Carolyn Pawlenty testified to her son’s character, calling him a “good man with a big heart”.

Outside the courthouse, her testimony, played on a loudspeaker, was greeted with groans and cat-calls.

Kenya Insights allows guest blogging, if you want to be published on Kenya’s most authoritative and accurate blog, have an expose, news TIPS, story angles, human interest stories, drop us an email on [email protected] or via Telegram

Why President Trump Will Ban TikTok From The US

UN peacekeeping Envoy captured ​having sex in an official car