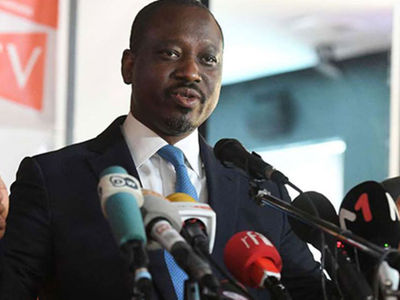 Former Prime Minister of Cote d’Ivoire, Guillaume Soro, has been sentenced to life imprisonment for his role in planning a coup against President Alassane Ouattara, the man he helped to take power about a decade ago.

A court in the Ivorian capital, Abidjan, gave the verdict on Wednesday, following a trial of Mr Soro in absentia.

He was accused of “conspiracy…attempt to undermine the authority of the state…and dissemination and publication of false news discrediting the institutions and their operation, resulting in damage to public morale,” the charge sheet filed by the state prosecutor, Richard Adou, read.

Soro was prosecuted alongside 19 other co-defendants, all of them members of his Generations and Solidarity Movement.

Two of his co-defendants, Souleymane Kamagate and Affoussy Bamba, were each given 20-year jail terms. Three other people, among them two of Soro’s brothers and a former aide of his, each got 17-month jail terms.

The court also ordered the confiscation of Soro ‘s assets and the assets of his 19 co-defendants, as well as the dissolution of his political grouping – the Generations and Solidary Movement – which was found guilty of involvement in “subversive acts”.

All the convicts were also fined a combined $179 million to be paid to the Ivorian government.